*A cookie is a small text file that a website saves on your computer or mobile device when you visit the site. It enables the website to remember your actions and preferences (such as login, language, font size and other display preferences) over a period of time, so you do not have to re-enter them whenever you come back to the site or browse from one page to another. Please read our cookie statement for more information about the different cookies ("More info"). 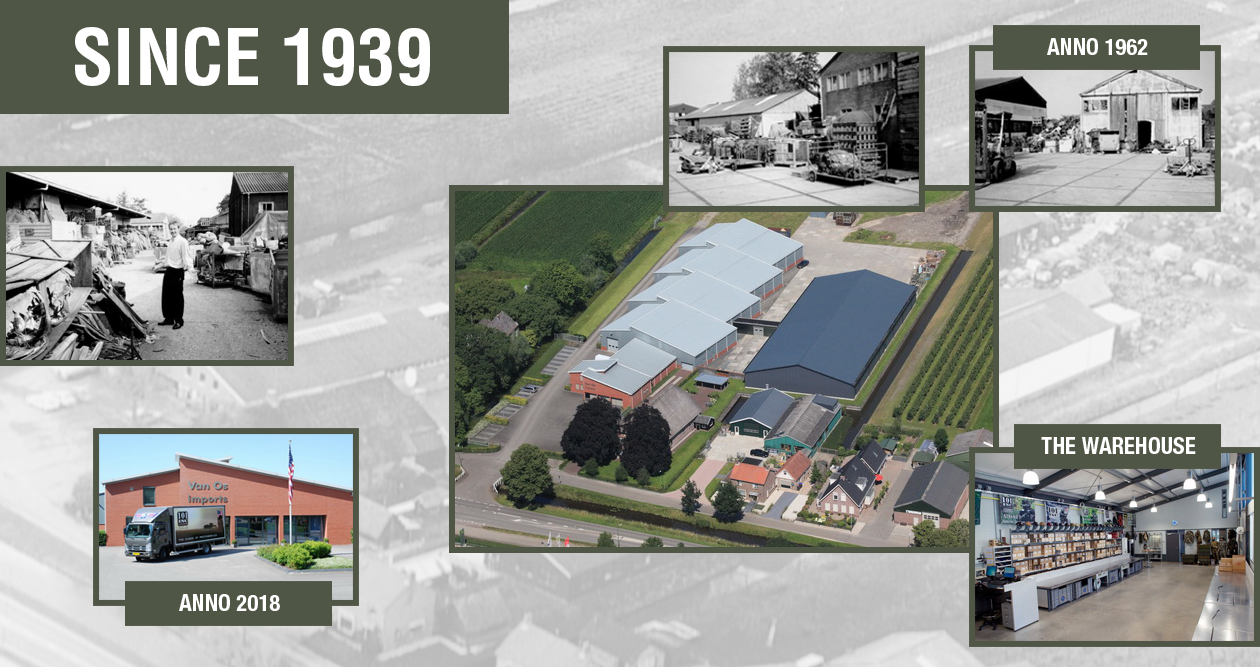 The early years
In 1939, the brothers Van Os started a business under the name “Brothers Van Os”. The brothers started their trade in the farming environment of a small village called Benschop,where the current Van Os Imports B.V. still thrives. Trade was mainly done in theagricultural sector, aimed at the fourage goods industry. However, The Brothers Van Os were faced with the arrival of the Second World War, which meant a tough time for the business in the Netherlands.

The years after the war
While the Dutch society started with rebuilding their lives after the war, the brothers Van Os discovered a new special kind of business; the trade in military goods and remaining army stock destined for army units in the Second World War. Their trade started with the purchase of a military surplusin army stock from the American Army Units who were settled in Europe during the second world war. Their new products consisting of jerry cans, textile and other redundant army materials resulted in the start of something special in an extraordinary and adventurous industry. The business activities consisted mainly of the trade in military goods. All these goods were stored inthe pastures and barns behind the farmhouse of the Van Os Family. There were literally large piles of military material in the pastures behindthe house of the Van Os family.

A new generation
The business in military surplus increased and son Floris van Os started to get more ambition for the business. Due to this, a new generation Van Os found his way into the family business.

Import of new products
From the knowledge Van Os acquired over the years, the company expanded. Currently, products were often imported from the United States and Europe. However, an ever-changing market with new opportunities came on the trail of the Van Os family. Due to these developments, Van Os came in contact with the import of new products from the Far East in the late 1980's.
Due to the rise of advanced technologies, product import from over the world became more accessible. Van Os responded fast to this business
opportunity and started with importing different products from the far east. A whole new product range, focusing on the military and outdoor equipment, was born.

The first trademarks
The start of this new range of products also ensured the arrival of the first official own brand names. The new trademarks known as: Fostex Garments, Fosco Industries, Stealth, Kosumo and Longhorn were introduced. These brands focus on the target groups; military, outdoor, biker, security and aviation.

Wholesale Van Os imports b.v.
Due to the introduction of Van Os own trademarks, an extensive product range and unique products, Van Os became a trusted name in the military and outdoor industry. The range of products became wider and deeper and the business in original army surplus became less. The demand for new unique and qualitative products increased and “wholesale Van Os Imports B.V.” became the new name of the company, as it still is nowadays.

Another new business premises
In 2003, another decision was made; the build of a complete new company complex started. A thoughtful innovative building with logistic efficiency, automatization and big storage possibilities. From this new complex with a storage capacity of 7500m2, the activities of Van Os Imports were continued.

Webshop
Back in the 90s the internet became of increasingly importance, Van Os Imports could not stay behind. An innovative web shop was build and became the new way of doing business. Nowadays all the business activities depend on this innovative web shop. Customers can order easily 24 hours a day and 7 days a week.

101 INC. Airsoft division
With a focus on new developments in the industry, in 2010 came the need for a new trademark in the range of military products. Due to this, the new brand “101 Incorporated” was introduced. This brand had to cover a new range of tactical products and gear with excellent quality.
With a vision focused on military and tactical products, a new opportunity appeared for the 101 INC brand in 2010; the upcoming popularity of the simulation game “Airsoft”. A sport where looks and feels must be as realistic as possible. With the coming of airsoft, the 101 INC brand got a new purpose and new challenge. As we speak today, the 101 INC brand exists out of a full range of tactical gear and airsoft products.